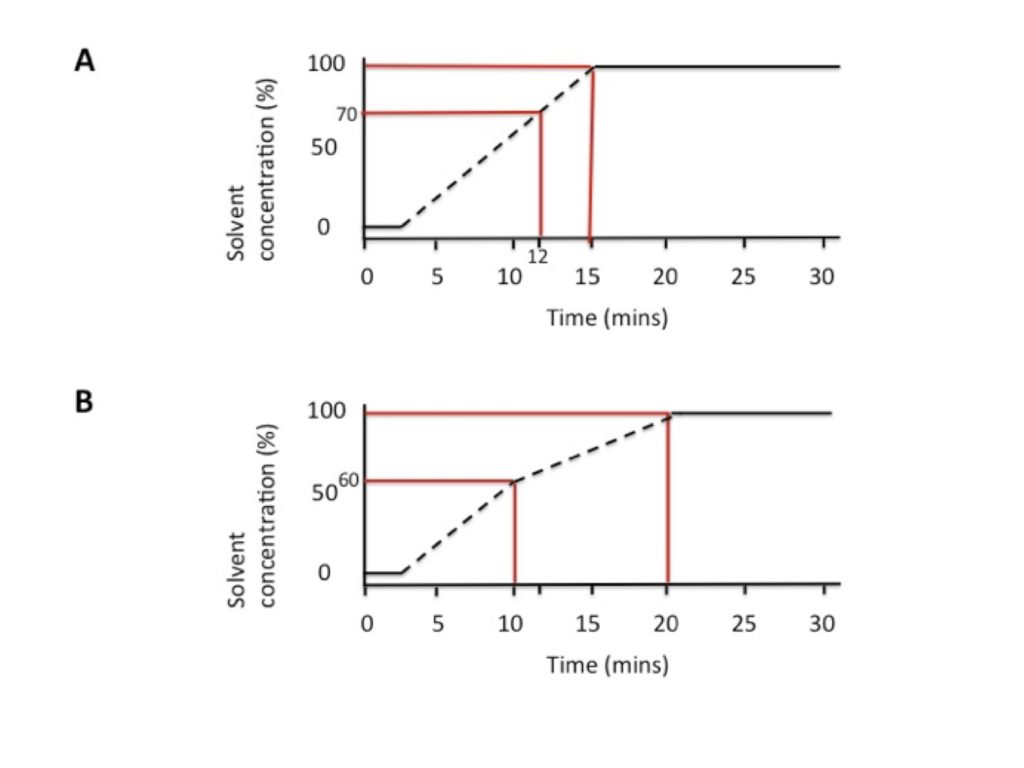 You are researching a biosynthetic pathway in your favorite fungus. You know that this pathway produces a family of toxic compounds, and you want to see if you can block this pathway (or parts of it) with an antifungal drug.

You have a control (no antifungal) and samples that have received different doses of the drug. There is unfortunately no standard available but you expect the compounds to elute between 12–15 minutes along your gradient (because your supervisor told you so!).

When you run your control, you can see a lot of things eluting between 12–15 minutes, but you can’t make out how many peaks there are as it’s just too crowded.

It’s not surprising that a family of compounds elute closely together, since they will have the same basic structure and therefore similar properties. You can’t do anything to change this fact.

How are you supposed to analyze this? You’re wondering what’s the point in running the rest of the samples, but don’t give up hope, at least not yet anyway!

You can alter your gradient so that you ‘stretch out’ the part of the run where your compounds elute, so that they elute over a longer interval.

To start with, look carefully at the HPLC data, and determine the concentration of solvent when your compounds elute. Let’s say your supervisor suggested gradient A, where you go from 0% to 100 % acetonitrile in 15 minutes. You observe a lot of material eluting between 12 and 15 minutes, where the acetonitrile makes up 70–100 % of the mobile phase.

Now ‘stretch out’ this part of the gradient to run over a longer interval. ‘Tell’ the HPLC machine to increase the acetonitrile from 60–100% from 10–20 minutes (gradient B). This means that your compounds will elute over a 10-minute interval instead of a 3-minute interval. In HPLC lingo, this is referred to as improving the resolution of your run. It is a good idea to start stretching out the gradient from 60% to allow your compounds more time to separate (if they elute as early as 70%).

An example is shown in Figure 1.

Figure 1. In gradient A, the solvent concentration rises from 0 to 100% in approximately 15 minutes. In Gradient B, the solvent concentration increases more gradually. The black dotted line indicates the gradient in each case. Since you are interested in compounds that elute in 70–100% acetonitrile, you will have a greater chance of seeing them clearly using gradient B, because this part of the gradient is stretched out. The red lines help to highlight the differences between the two gradients.

The example given here represents just one approach to how you might go about optimizing your gradient. In reality, you could sometimes be faced with the opposite situation, where you notice that no compounds elute for the first 20 minutes of your run. In this case, you might speed that part up by increasing the solvent concentration faster, saving you a lot of time and potentially solvent.

Although HPLC is relatively straight forward once you get the hang of it, optimizing a gradient can be tedious and time-consuming and is very much a case of trial and error. You can go a long way by looking at your data carefully and making some common sense decisions!