In the first article of this series, I introduced microscopic parasites that infect greenhouse plants.  Initially, my goal for Part 2 was to list all the main types of infestations, but I quickly realized to do so would result in a textbook. Thus, this article will be about the most familiar and easy to identify pests: insects. More specifically, I will introduce you to the most common types of insect pests that plague most greenhouses: fungus gnats, aphids, scale insects, and mealybugs. 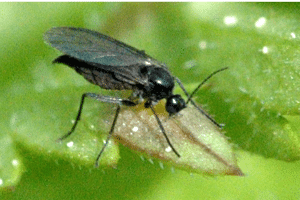 Fungus gnats are small, 2 – 8 millimeters flies that belong to six families of the superfamily Scaroidea. The white larvae of most species feed on fungi growing in soil. They do little damage to healthy plants, so the appearance of fungal gnats may not be as bad as it looks. However, the presence of gnats is an indication that the soil is too moist and the plant may be experiencing root rot.

The flies can be caught using yellow sticky flypaper. But you need to remove the source of the adult flies by stopping larvae hatching. Larvae are killed by dry soil. Additionally, you can put sand on top of the substrate, which will preclude the laying of new eggs.

One common and effective treatment is the addition of diluted hydrogen peroxide (3% hydrogen peroxide mixed with four parts water) to the soil.  This application also counts as watering, which you want to do sparsely anyway.

There is also biological control by mite Hypoaspis miles and bacteria Bacillus turingiensis, but you probably don’t want to introduce even more organisms into your experiment. 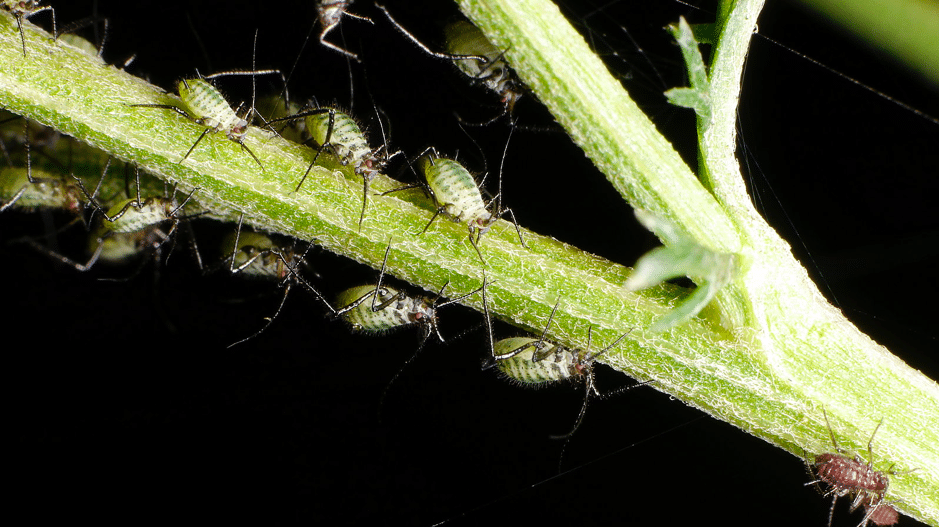 Aphids are small sap-sucking insects of the superfamily Aphidoidea. Aphids are soft-bodied and pear-shaped insects with long legs and antennae.  Depending on the color they are called greenfly, blackfly, or whitefly; however, individuals within a species can vary widely in color, and the color of the insect usually matches the plant they feed on.

Aphids spread by a winged form that is replaced by the wingless insects that reproduce parthenogenetically. Aphids suck the sap out of plant phloem and excrete an excess of sugar attracting ants and creating conditions for black mold development.

Unlike sciarid flies, aphids do real damage to plants. A combination of high reproduction rate and active sucking of sup with nutrients usually leads to severe deterioration or even death of the plant.

You can try controlling aphids with a systemic insecticide. As with the antibiotic treatment of bacteria, it’s important to use the recommended dose of the insecticide and treat thoroughly as aphids can develop resistance to carbamates, organophosphates, and pyrethroids.

Spraying plants with water jets can be effective in the control of aphids, especially if the water contains insecticide soap. However, some plant species are sensitive to soap. If using water, you need to make sure to spray the entire plant, including the undersides of the leaves. And you will have to do it several times on consecutive days, as just one bug can exponentially reproduce quite rapidly.

An alternative to insecticidal soap is neem oil that is successfully used to control pests including in organic conditions. 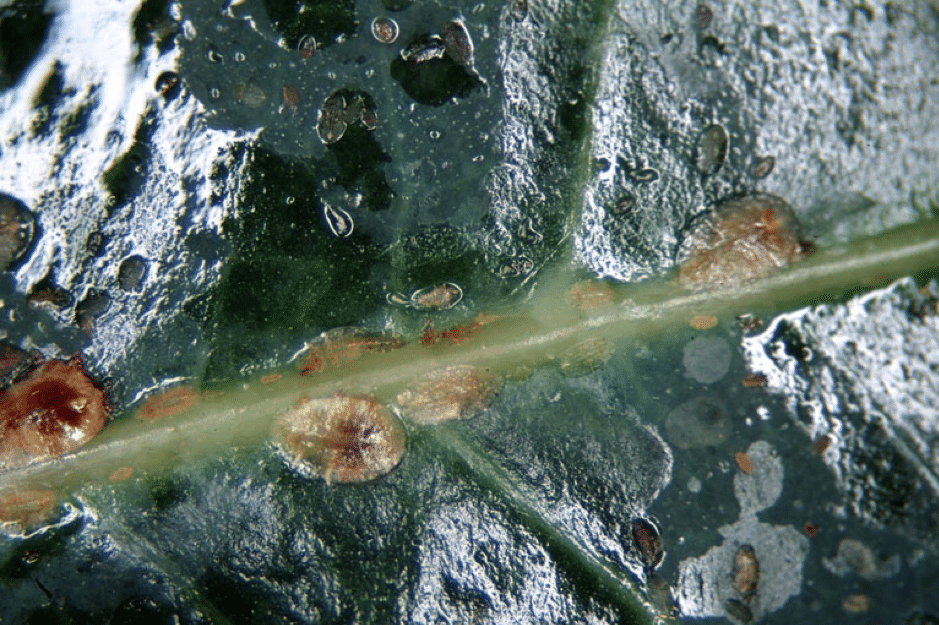 Scale insects are several millimeters in length and look like little turtle shells attached to plants and don’t move, making it difficult to recognize them as insects. The female scale insect extrudes a waxy substance that covers them, and male insects have wings and are short-lived for days, just as male bees in comparison.

Like aphids, scale insects feed on sap, and they can penetrate wooden stems.

The waxy shell of the female scale insect protects them from contact insecticides that are effective only against young form with thin cuticles. However, it’s possible to use systemic pesticides that act from within the plant sap.

Because the scale insects don’t move, it’s possible to remove them mechanically using a detergent such as insecticidal soap. Horticultural oils such as neem oil are also used to suffocate the insects. 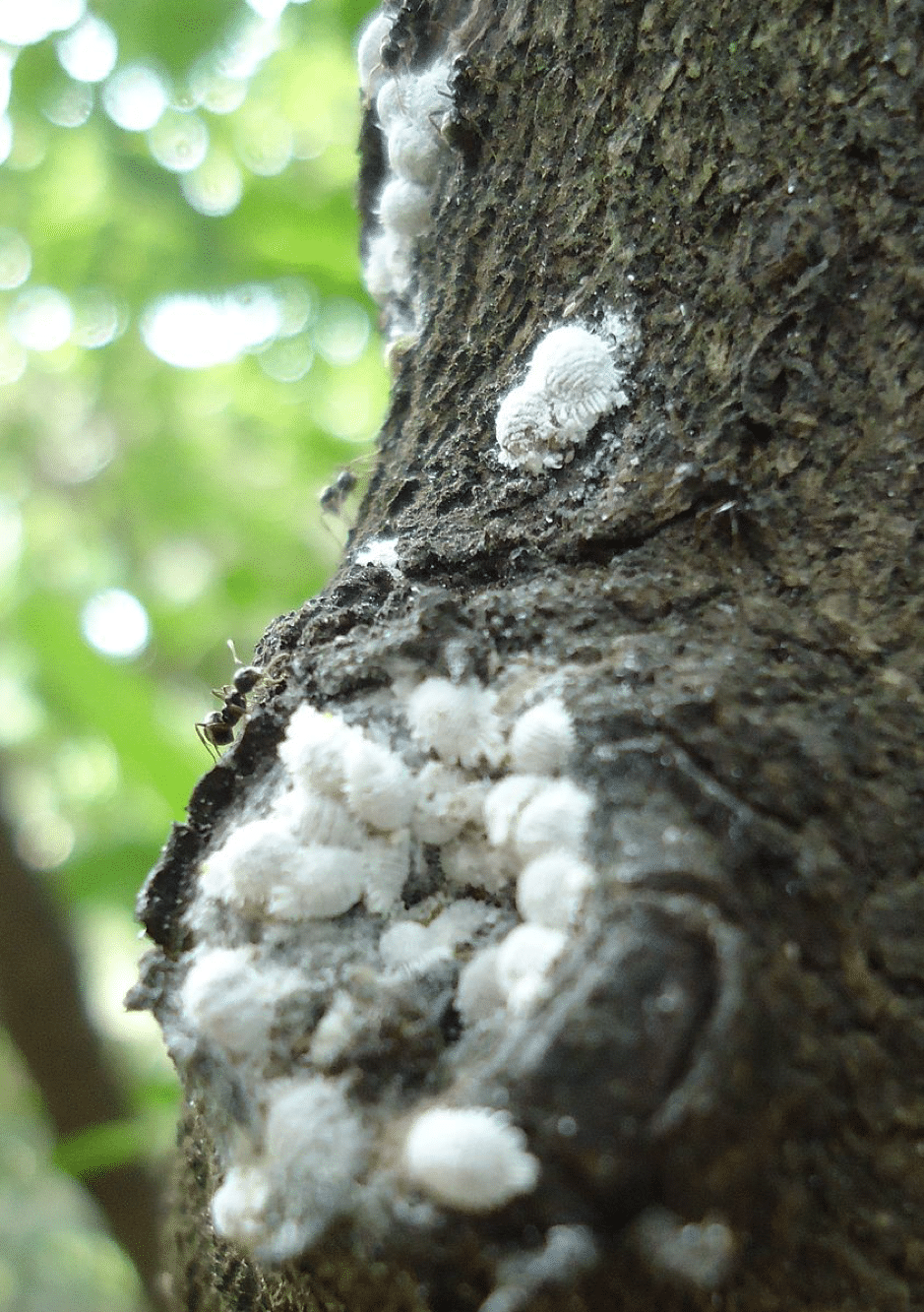 Mealybugs belong to the same insect superfamily Coccidea as scale insects.  They have an ovoid shape but don’t secret the waxy hard substance that covers individual insects. Instead, they secret a white powdery substance (the origin of the name mealy) that protects one or more insects. Some species lay eggs in the substance. Like scale insects, mealybugs have sexual dimorphism – females are wingless, while small males have wings. Unlike scale bugs, females can move.

There are two types of mealy bugs that infest greenhouses: one that lives in soil and one that lives on the above-ground parts of plants. You can control the above-ground species with the application of systemic insecticide (i.e. diazinon). Systemic insecticides require repeated use and may not work on larger plants due to the decreasing concentration of the active compound in the peripheral parts of the plant.

Local application of 50% v/v isopropanol, 2% w/v SDS aqueous solution is usually effective in the removal of insects. Isopropanol dissolves the outer insect cover while SDS kills the insect. You can also use insecticidal soap.

Mealybugs in the soil are less visible and are harder to treat. If possible, destroy the plant and soil. Alternatively, you can also remove the plant, carefully wash the roots, and replant into the new soil.

Biological control of mealybugs includes the application of the fungus Lecanicillium lecanii or ladybirds.

In conclusion, unlike microscopic pests, insects are easy to identify as the cause of your plants’ problems. It is important to immediately start treating the problem before your greenhouse is overrun. A few dismissed stray insects can wreak havoc quickly.