The enemy of my enemy is my friend

Luna, 20 July 1969. Neil Armstrong set his foot in another world for the first and only time in human history. But this is not a story about space exploration; it is a story about the vehicle they used to do it—the Lunar Module Eagle. Its design was inspired by one of the most microscopic and fascinating life forms on planet earth: bacteriophages.

Originally discovered in 1915 by Frederick W. Twort, bacteriophages are viruses that only infect bacteria and are considered the most abundant life form on the planet, with estimates of up to 1031 individual viruses. They are enemy number one for bacteria, and the reason the bacterial population is controlled. Bacteriophages are everywhere, even in human intestines to control the population of Escherichia coli.1

For many years bacteriophages have been the “black monolith”2 of modern molecular biology.They have been exploited on many levels: from acquiring genes useful to molecular and synthetic biology (such as T4’s lysozyme or T7’s RNA polymerase famous promoter), to temperate phages being used as vectors (? bacteriophage) for genes of interest in various bacterial mutations, and also in the famous phage display protocol where protein-protein interaction can be monitored. Phages have provided, without any doubt, a varied arsenal of tools through the years. Molecular biology wouldn’t have made its extraordinary leaps in the latest decades without them.

But are we done with bacteriophages yet?

The history behind the curtain

Originally, bacteriophages weren’t approached as tools for molecular biology but as the number one antibacterial agents of the time. Félix D’ Hérelle, a French-Canadian microbiologist with 10 Noble Prize nominations and yet to receive one, was the first phage therapist. In 1917, the first human patient with bacterial dysentery successfully received phage treatment. However, it took another 6 years, over a decade since the original discovery of the bacteriophage, for phage therapy to reach the general public, with more and more microbiologists and pharmaceutical companies becoming active in this field. However, with limited technology at the time, and the first commercial Transmission Electron Microscope for biological samples still over ten years from being developed, these researchers were trying to exploit life forms they had not seen. Numerous problems emerged stalling progress.

In 1934, D’ Hérelle travelled to Tbilisi, Georgia in the USSR at Stalin’s invitation. D’ Hérelle met Prof. George Eliava who shared his passion for microbiology and phage therapy. Together, D’ Hérelle and Eliava took phage therapy a step forward by attacking (and defeating) many bacterial diseases that were devastating the population.

At the same time a new antibacterial agent was taking center stage in the Western World: antibiotics. Although penicillin was discovered in 1928 from Alexander Fleming, it was not available to the public until the end of World War II and by the cold war phage therapy became neglected in the U.S.A. and Europe, while it continued to thrive in the former USSR nations.

Figure 1. Timeline of Phagebiotic Discovery and Use

Believe it or not, you can actually go to some pharmacies there, even today, and ask for bacteriophages in order to treat a bacterial infection. In Tbilisi, Georgia, at the institute where George Eliava and Félix D’Hérelle used to work (Eliava Institute3), people with rare or untreatable bacterial infections from around the globe seek treatment by phage therapy. In Tbilisi, you can meet people who have never taken antibiotics—only phages—during their lives!

But why do phagebiotics matter now?

It is not a secret that the excessive use of antibiotics has generated the so-called “superbugs” and phage therapy as an alternative to the antibiotics reached out again in the public in Science Magazine’s 2002 publication “Stalin’s forgotten cure.”4 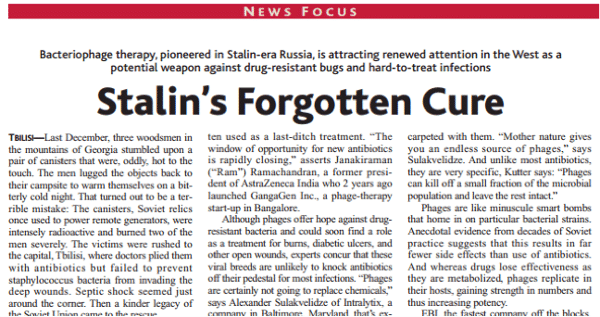 Bacteriophages are viruses and, like all viruses, they are divided in lytic or lysogenic (temperate), depending on their method of replication. Temperate phages are able to integrate their DNA into the bacteria’s, remain dormant for long periods, and replicate mostly (but not only) according to bacteria’s replication. This makes the lysogenic phage’s relationship with bacteria a little bit more complicated than that of a hunter and its prey—in some cases it can be a mutual symbiotic relationship. Lysogenic phage DNA regions have been found in the DNA sequence of many bacteria—and rarely it has dire consequences for humans. For example, this integration of prophage genes into the bacteria’s genome is why humans contract cholera from Vibrio cholera serotype O1 or O139. It may be surprising to some that cholera is not actually considered a type of vibriosis.5 Proteins that, while produced by Vibrio, arise from gene integration by temperate phage cause the illness.

On the other hand, lytic bacteriophages, which are the ones that are used in phage therapy, infect bacteria in five major steps. In the attachment step, the bacteriophages use their fibers (if they have them) or their tail to bind specific protein receptors of the bacterial membrane. Some phages are also able to attach to the motility appendages of the bacteria, such as flagella or fimbriae. Receptors can be transmembrane proteins or (lipo)polysaccharides that are part of the bacterial membrane. The second step, called adsorption, phages uses their baseplate to inject their nucleic acid into the cell. The form of this nucleic acid can vary (ds-DNA, ss-DNA, ds-RNA, and ss-RNA). Next, the bacteriophage uses the biological machinery of the bacteria to synthesize the early proteins and replicate the phage DNA. This is followed by assembly of virions (new bacteriophages) inside the cell. Finally in the lytic phase, when the virions reach a critical number, the cell bursts and releases the new phages into the…wild. The time that takes these five steps to take place can vary from several minutes (!!) to a couple of hours depending the bacteria, the phage and the conditions that prevail during the interaction.

These are just the basics for someone who is eager to learn more about these guys. 2015 has been also announced as the “Year of the Phage”6 and this decade as “the renaissance of phages.” In Part 2, we will investigate pros and cons of modern phage therapy as well as different strategies and points of views that someone can use in order to exploit their natural purpose of their life.

Share this to your network:
TwitterFacebookLinkedIn
Written by Dimitris Skliros