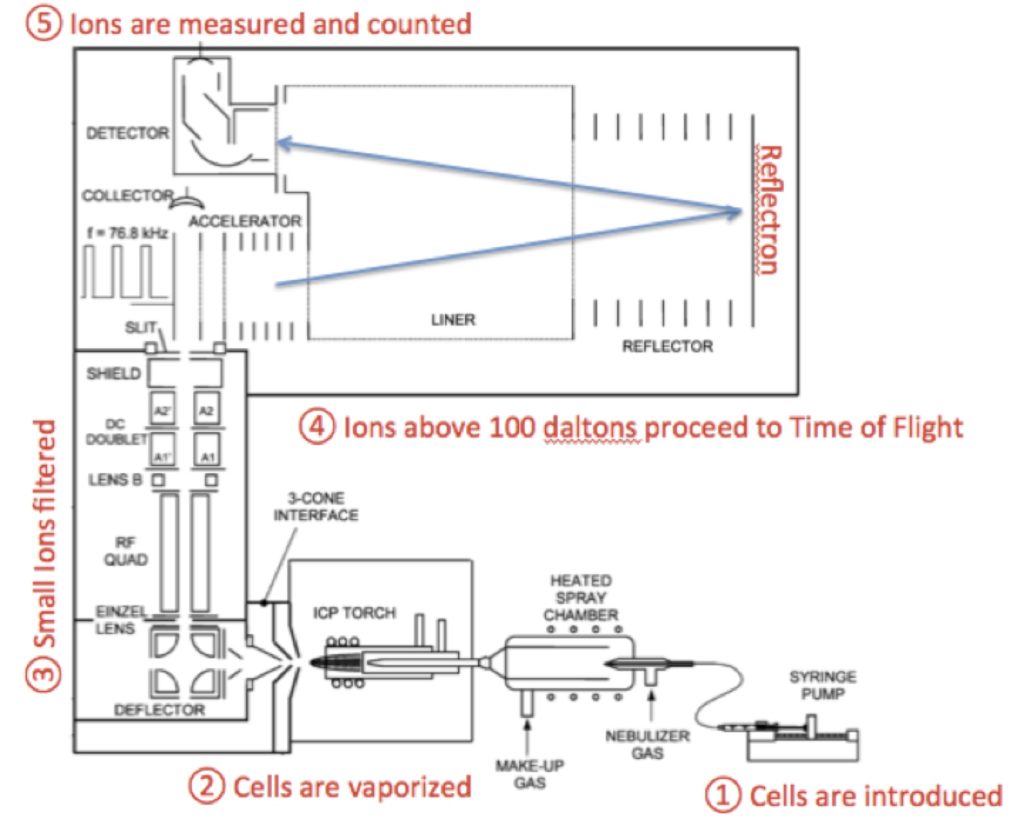 Flow cytometry remains unparalleled as a single-cell analysis technology.  The ability to analyze 14 or more fluorescent parameters on a million cells or more allows for detailed understanding of complex biological processes.

The Problem With Traditional Flow Cytometry

One limitation of flow cytometry is the reliance on fluorescent tags.   Even with careful panel design, loss of resolution occurs because issues including autofluorescence and spectral spillover cannot easily be avoided.   The greater the number of fluorochromes used, the larger these problems become magnified.

To overcome this issue, a new method of detecting  antibodies bound to cells must be considered (CyTOF).  This method needs to be robust enough to measure the amount of each label, and distinguish the different labels with sufficient accuracy.

One such detection method is a time of flight mass spectrometer (TOF-MS).  TOF-MS is a very accurate and robust method for measuring the mass to charge ratio of an ion.  In TOF analysis, all ions are accelerated through an electric field of a known strength, and the time it takes these ions to reach the detector over a known distance is measured. The heavier the ion, the longer it takes to get to the detector.

In mass cytometry, the label of choice is highly-purified, stable isotopes.  Currently the lanthanide series is used, but additional isotopes will become available as the conjugation chemistries are optimized.

Taken together – the labeling of antibodies with stable isotopes, the vaporization of cells by the ICP and the detection of the ions by TOF-MS are pulled together in the DVS CyTOF mass cytometer. Schematically, this looks like such:

The Pros and Cons of CyTOF

The advantages of the CyTOF include:

Limitations of the CyTOF include:

Mass cytometry represents a new way of measuring and phenotyping cells.  It takes what is familiar (labeling cells) and extends the dimensionality of the data to over twice as many parameters as that of traditional fluorescent flow cytometry. This can be a very powerful tool for screening multiple intracellular targets in well-defined phenotypic populations, such as was shown in the paper by Bendall et al (2011).

If screening very complex populations is critical for your research, consider investing in learning and utilizing this technology – if not at your institution – reach out to an institution that has one.  Since the cells must be fixed, it is possible to mail samples to another institution for analysis.

Share this to your network:
TwitterFacebookLinkedIn
Written by Tim Bushnell