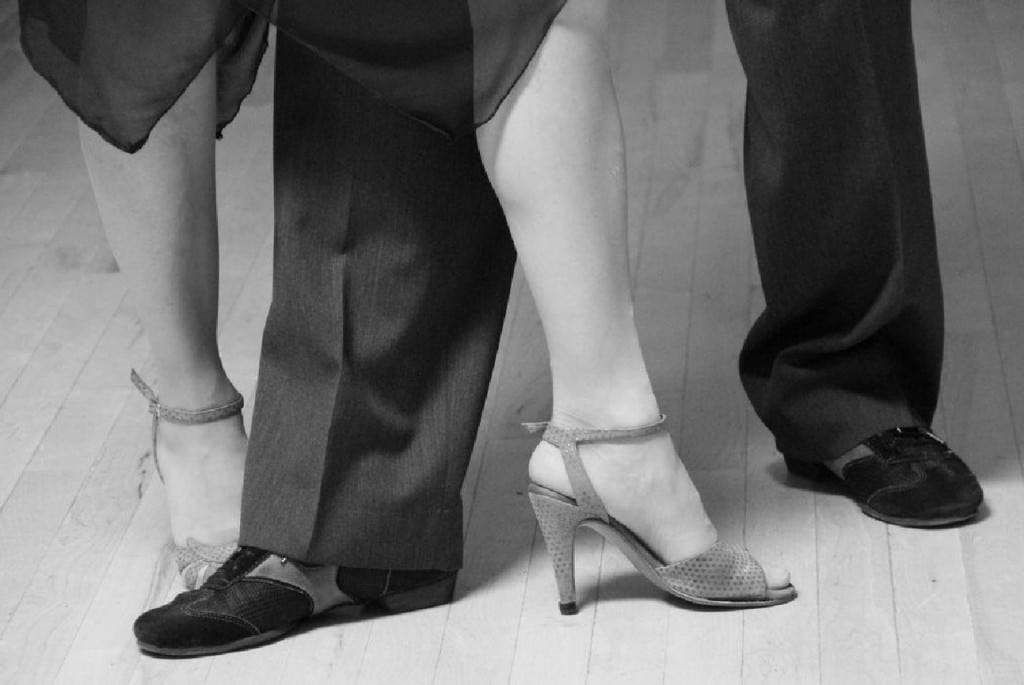 “While I dance I can not judge, I can not hate, I can not separate myself from life. I can only be joyful and whole. This is why I dance.” – Hans Bos

While in graduate school, I tried really hard to find an activity that would allow me to disassociate my body from my mind, so to speak. Readers can probably relate to how frustrating it can be when one experiment after another gives you negative results, and how you refuse to let that debacle stop you from completing your dissertation. That frustration, however, would sometimes carry over from my work to my everyday life. I tried various activities that would help me “balance” myself. Then one day, I discovered Argentine Tango. I had no background in dance, and always felt awkward when dancing socially. Nor did I have any training in music. However, to my great surprise, the sound of Argentine Tango captivated and transformed me; it freed my mind and evoked a range of positive emotions.

Now, picture everything you know about Tango … Women in revealing dresses, men wearing fedora hats, dramatic postures, acrobatic moves, the man throws the woman down on the floor and drags her by her hand, or foot … Yes? Now discard everything that you think you know. Our general understanding of Tango is misshaped by exposure to television, by such shows as Dancing with the Stars and movies that emphasize the show-like aspects or specific steps to impress the audience. However, this is not at all what Argentine Tango really is. The soul, the very foundation, of Argentine Tango is deeply rooted in the music and the embrace that originated in the 19th and early 20th century slums and immigrant barrios of Buenos Aires, the artistic mixing pot of cultures and traditions. Unlike other dances, Argentine Tango’s embrace is very much like a natural hug, and unlike Ballroom dancing, there is no pre-determined sequence of steps or patterns. So then, what is Argentine Tango and why is it so unique?

For me, Argentine Tango is a chance to be free, a chance to improvise, a chance to do, or not do, to move or not move, all the while being in the embrace with another person who, at the same time as me, is also feeling a whole range of emotions evoked by the music, and moving with me, in sync, as one, to the rhythm of tango music. You find yourself liberated, free to constantly improvise, and interpret unique rhythms for every moment of the dance. In this embrace, two people share the movement and the music.

I noticed that every time I danced Argentine Tango, I felt good, I felt happy, I felt fulfilled. While the world could be crumbling all around me, for that moment when I was dancing in an embrace with another person, I felt outside of all the chaos, I felt soothed and comforted… then the music would end and the reality would return, only again to be blocked out by the soothing effects of moving to the music in unison with another person.

At the same time I noticed how my coordination greatly improved. I made it a habit to listen to tango music while working in the lab, noticing that I could tap my feet to the music while I set up and performed experiments with my hands, and not once did I get confused or messed up. Talking and trying to set up my experiments, on the other hand, often proved disastrous. It is as if the part of my brain that enabled me to respond to rhythm and movement was further stimulated by simply listening to tango music, while at the same time enabling me to multitask. Argentine Tango naturally improves balance by training the dancer to step in all directions, forward and backward, placing one foot in front of another and transferring weight, rolling through the foot from heel to toe, or toe to heel, maintaining a forward lean while in the embrace with a partner, and executing various dynamic turns and pivots. Tango techniques help develop focus, attention to task, and cognitive skills like dual tasking, since a dancer’s attention must be divided between navigation and balance. Here is an example of what traditional Argentine Tango looks like, danced by Osvaldo Cartery and Luisa Inés ‘Coca’, a 64-year old Argentinean couple who won the Tango World Championship in 2004.

When I try to think of how to describe the effect of Argentine Tango on my mental and physical state, the word that comes to mind is “therapeutic”. So could such “Tango Therapy” help people who suffer from conditions that limit their mobility, like the elderly and Parkinson’s patients? Is it ridiculous to suggest that people who suffer from reduced balance and cognitive function, who cannot walk without the fear of falling, can actually be taught to dance tango? And even more ridiculous, to suggest that people with difficulty walking will actually benefit from dancing tango? I want to say that there is nothing ridiculous about what is suggested here. And while the scientific community might dismiss such suggestions as hokum, it has already been shown that tango can be an effective and feasible tool in improving mental function and balance in the frail elderly. McKinley and colleagues compared a group who walked for exercise to those who danced tango and demonstrated greater improvements in balance and walking speed in the dancing group (McKinley, 2008).

In another study conducted at Washington University in St. Louis, 19 Parkinson’s subjects were recruited with 19 controls (all ages 55 and older), and divided into a Tango group and an exercise group (Hackney, 2007). For the next 13 weeks, students in the Tango group were taught tango-style walking, timing, footwork and embellishments, rhythmical experimentation with and without a partner, all to traditional tango music (an interview with Dr. Earhart, the senior author on the paper, can be found here). Researchers observed that tango had a marked effect in slowing down the progression of Parkinson’s disease, with subjects participating in tango classes showing “significant improvements in balance and mobility when compared to patients who did conventional exercise.” These results provide strong evidence that Argentine Tango is an appropriate, enjoyable, and beneficial activity for the healthy elderly and those with Parkinson’s, and that tango may convey benefits not obtained with a more traditional exercise program. How can that be? What is so special about Argentine Tango that other methods do not offer?

In another study, Brown and colleagues looked at the regions of the brain involved in the control of tango movements in healthy individuals and identified the basal ganglia, which happens to be the area of neurological degeneration in the Parkinson’s, as specifically involved in the control of dance movements (Brown, 2006). Increased activity in the basal ganglia was observed when the tango movements were performed to a metered beat in a predictable rhythm. So does dancing Argentine Tango reactivate the areas that are deteriorating in such conditions as Parkinson’s? The studies support this notion. Tango emphasizes walking steps based on external cues, with music serving as the auditory cue, to potentially reroute the brain to focus conscious attention on walking to improve walking performance of the Parkinson’s patients. Dr. Earhart and the researchers at Washington University reported that “all participants in the tango group felt that music helped their experience in the class … because music helped them initiate movement, the beat of the music helped keep them moving in time to it, and music made it more enjoyable for them”. One participant wrote that with music she “could forget imbalance, could be relaxed on my feet, because the music directed and initiated movement, it was so pleasant and enjoyable.” Another wrote “Without music, why dance?” Many extolled music’s virtue of making exercise become dance.

There are also additional cues provided by the embrace with the partner, which offers human interaction through touch as a tactile cue for signals that can potentially bypass the dysfunctional basal ganglia and activate alternative mechanisms to improve movement and balance. Argentine Tango involves touch in a gentle embrace, which is indispensable to the elderly and health-challenged as demonstrated in a Dance/Movement Therapy program for the neurologically impaired (Berrol, 1997).  The embrace itself serves as a natural support to improve balance and posture, thus countering the threat of falling and bolstering confidence. Moving in the embrace provides great benefits as Argentine Tango incorporates a range of motions that may help patients with Parkinson’s, including moving backwards, coupled with visual and auditory cues that help initiate movement to overcome the freezing gait, so common in Parkinson’s patients. Argentine Tango also emphasizes multitasking by combining stepping and leading or following the music while also navigating on a dance floor, all made possible by an intricate nonverbal connection through the embrace between the leader, the follower, and the music.

Additionally, there is a social aspect of Argentine Tango which makes a person feel like they belong to a community of people rooted in self-expression, full of meaning and soulfulness. It is an enjoyable and engaging social activity that can greatly improve the quality of life. While there are only a limited number of studies that have investigated the benefits of dancing, and specifically Argentine Tango, on mental and physical well-being, it is safe to say that dancing is 100% fun and invigorating. So next time you lament growing older or are feeling down, sign up for a dance class and dance! Dance your way to feeling well!

Hackney ME, Kantorovich S, Earhart GM. A study on the effects of Argentine tango as a form of partnered dance for those with Parkinson disease and the healthy elderly. Amer J Dance Ther 2007;29 (2):109–27. 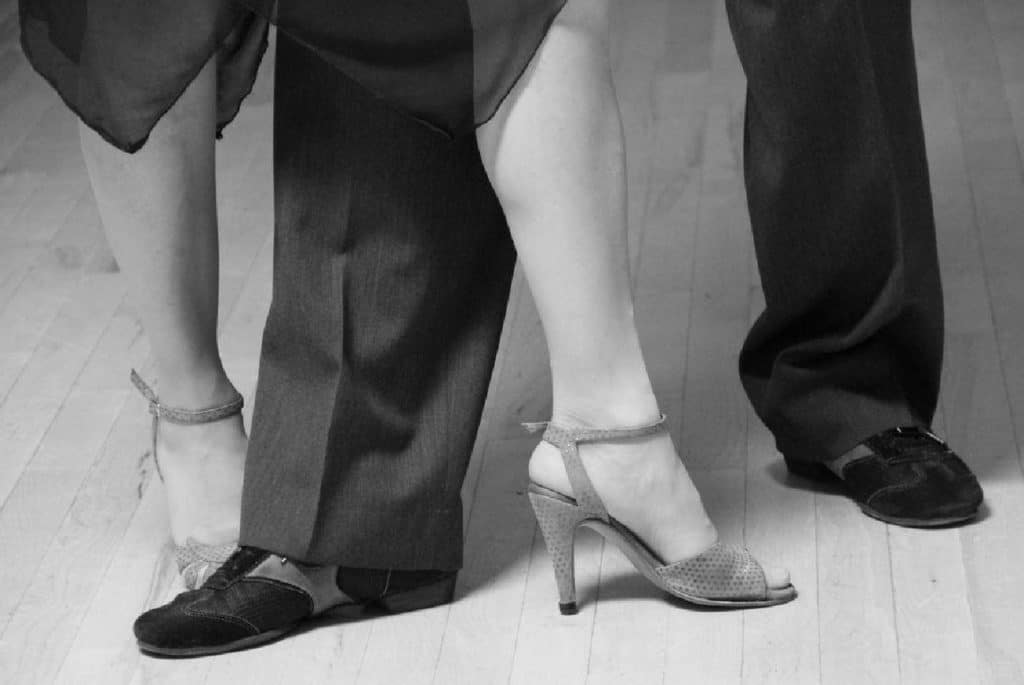