By now in our series on the Basics of Protein Phosphorylation, you’ll see that certain concepts and mechanisms- such as some of those that surround the protein kinases- are relatively well-understood, whereas others are still very fuzzy. When it comes to the protein phosphatases, however, much surrounding them is poorly understood. Thus, when you read this segment of our “Basics” series, try to realize that if phosphatases end up confusing you, this is by no means unusual!

But the situation is in reality, far, far “worse” than that. There are well over 500 known kinases, plus who knows how many more as-of-yet unknown kinases. And these kinases don’t have merely one target each- casein kinase 2 (CK2) alone, a single kinase, has over 200 known protein substrates. That would mean that whatever meagre number of protein phosphatases there are, they need to contend with far more than simply 20 substrates each.

Phosphatases have families, too

How do protein kinases select there targets? Well, as we saw last time, kinases are grouped into a multitude of families. There are the protein serine/threonine kinases (PSTKs) that phosphorylate proteins at serines and threonines, and the protein tyrosine kinases (PTKs) that phosphorylate at tyrosines. Then, there are consensus sequences based on amino acid characteristics- acidophilic protein kinases that tend to enjoy the company of many surrounding glutamates and aspartates, basophilic protein kinases that hang out with the lysines and arginines, and so forth. These give rise to all the families we saw in Cell Signaling Technology’s human kinome.

PPP/PPM families: The classification of this family has changed often only in the past few years, and is constantly being reorganized in real-time. Currently known as two distinct families- the phosphoprotein phosphatases (PPP), and the phosphatases that are metal dependent (PPM)- these are the largest families and encompass most of the known phosphatases. Originally, most of the protein phosphatases in the PPP and PPM families were grouped into one large, loose family of protein serine/threonine phosphatases (PSTPs), that were then further subdivided based on 1) no metal ion requirements, or 2) a need for metal ions, and specifically, which metal was needed- magnesium, manganese, zinc, calcium, or others. We’ll see what types of family organizations exist next year…

The phosphatases here are imaginatively named. There is protein phosphatase 1 (PPP1), most famous for dephosphorylating glycogen phosphorylase, and halting the production of glucose from the polymeric storage form of glycogen. Protein phosphatase 2 (PPP2; formerly known as PP2A), may (or may not) be manganese dependent, and is known for dephosphorylating the targets of insulin and cancer-related signalling cascades, such as Akt and MEK. Protein phosphatase 3 is definitely one of the schizophrenic (pun intended!) phosphatases- it’s known as PPP3, formerly known as PP2B, and also known as calcineurin. Heavily calcium dependent, PPP3 is often found in nerve cells (hence the calci–neurin name), involved in the necessary signals that make our nervous system work. The list goes on…

A bit of restraint, please!

Clearly, there are some similarities between phosphatases and kinases. They’re specific to serine/threonine or tyrosine. They obey some form of consensus sequence- although this is somewhat loosely defined in the case of phosphatases. One obvious difference, however, is the sheer number of phosphoproteins that phosphatases can recognize in contrast to kinases. They’re definitely a promiscuous bunch by comparison.

Accessorizing- more than just the key to fashion

Let’s investigate a bit more on the function of phosphatases by using PPP2 a.k.a. PP2A (old habits die hard) as an example. PP2A is a heterotrimer- it consists of three non-identical subunits.

Two of these are the “core” subunits. There’s the C subunit which is, appropriately enough, the catalytic subunit. Two isozymes of the catalytic subunit can be found: an alpha and beta. There’s also an A subunit, which is regarded as somewhat of a “constant” subunit. Weighing in at 65 kDa, it’s the scaffold unit that provides the bridge between the C subunit, and the next topic of discussion, the B subunit. Once again, there are typically two isoforms of the A subunit: alpha and beta. Binding of the A subunit alone is enough to significantly affect the activity of the catalytic C subunit- thus, between two catalytic subunit isozymes and two A subunit isoforms, we’ve now just shown six possible distinct behaviours for the PP2A C subunit.

The B subunit is where (some of) the magic happens. The B subunits are highly diverse and regulate the activity, affinity, and substrate recognition of the catalytic subunit. For instance, when PP2A is “wearing” the B’ delta (B prime delta) subunit, it recognizes and dephosphorylates cell division cycle phosphatase 25 (Cdc25), bypassing the DNA damage checkpoint and promoting mitosis. However, when PP2A binds the B gamma subunit, it recognizes and dephosphorylates tumour protein 53 (p53), halting cell proliferation. Same phosphatase- different cell effects. In eukaryotes, the B subunit is divided into various classes, the members of which can number up to 20.

Let’s play the numbers game again. Assuming for a moment that the number of B subunit isoforms, 20, is set in stone- when coupled with the 6 combinations of PP2A C and A subunit associations, this now allows for 120 distinct combinations of subunit isozymes, and distinct behaviours of PP2A.

Along with phosphorylation of the scaffolding and regulatory subunits, many of the other post-translational modifications are also fair game: methylation, acetylation, hydroxylation, and so on. With this multitude of combinations, we begin to see how a small number of phosphatases can do the big- yet highly sophisticated- job that is required of them.

I originally said I would bring the “Basics” series to a close after the fourth article, on phosphatases. But I have one last surprise before I wrap this up. Stay tuned! 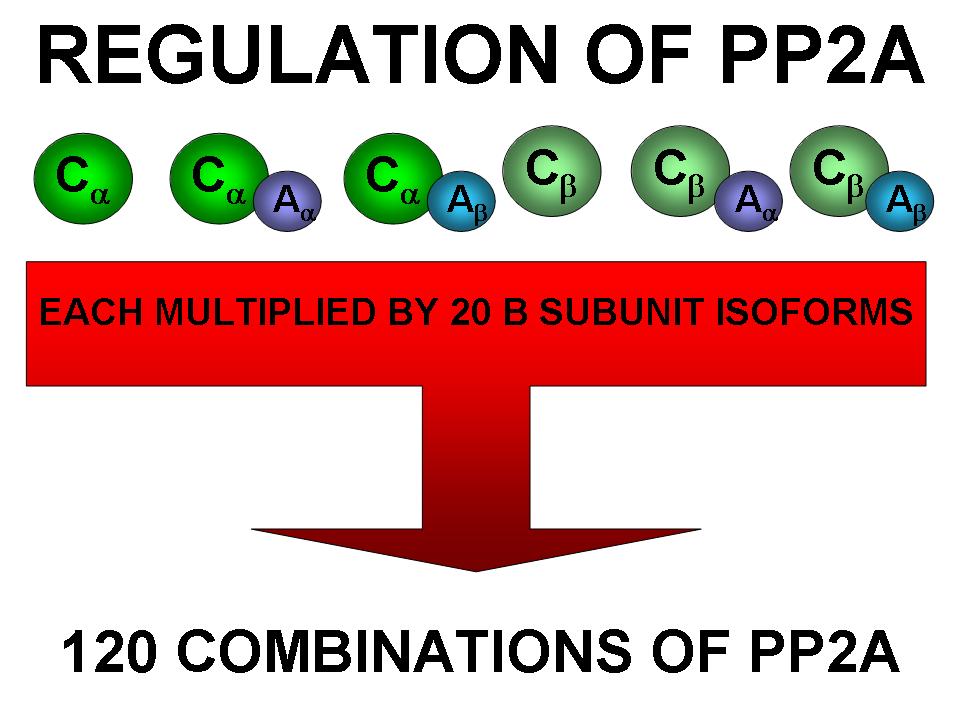