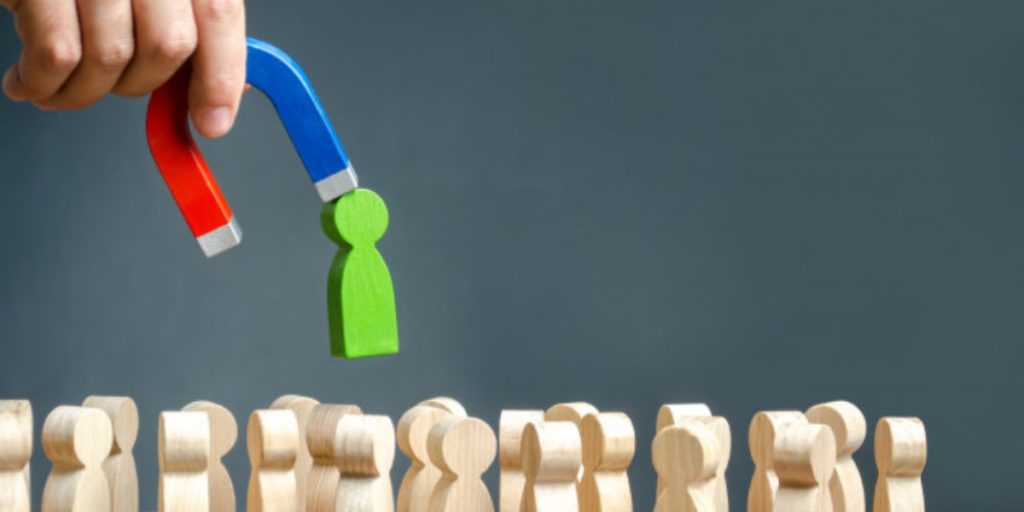 Antibiotics are used in molecular biology as a means of maintaining selective pressure when cloning. You ligate your insert into a plasmid containing an ampicillin resistance gene, use this construct to transform your E. coli, and then culture on medium containing ampicillin. The bacteria that grow, for the most part, harbor your cloned gene. Pretty effective and straightforward, but is there a downside?

Antibiotic resistance in community and healthcare settings has become a significant problem, and clinicians and veterinarians are adopting better antibiotic stewardship practices in medicine and agriculture to reduce the spread of antibiotic-resistant organisms.

Does the use of antibiotics in the molecular biology lab contribute to antibiotic resistance outside of the lab? Some in the research community have raised concerns, [1] and while more data are needed to determine this, the potential of exposure to researchers and horizontal resistance gene transfer is there. This is especially true if the cultured organisms are going to be processed to create, for instance, vaccines. So, if this worries you, fear not, there are alternatives to antibiotic selection – let’s take a look at some of them below!

There are two main methods by which one can select for desired clones. One takes advantage of a naturally occurring system that maintains the F plasmid present in some E. coli, and the other utilizes mutant strains that must be cultured on rich medium to survive. These are summarized in Figure 1. 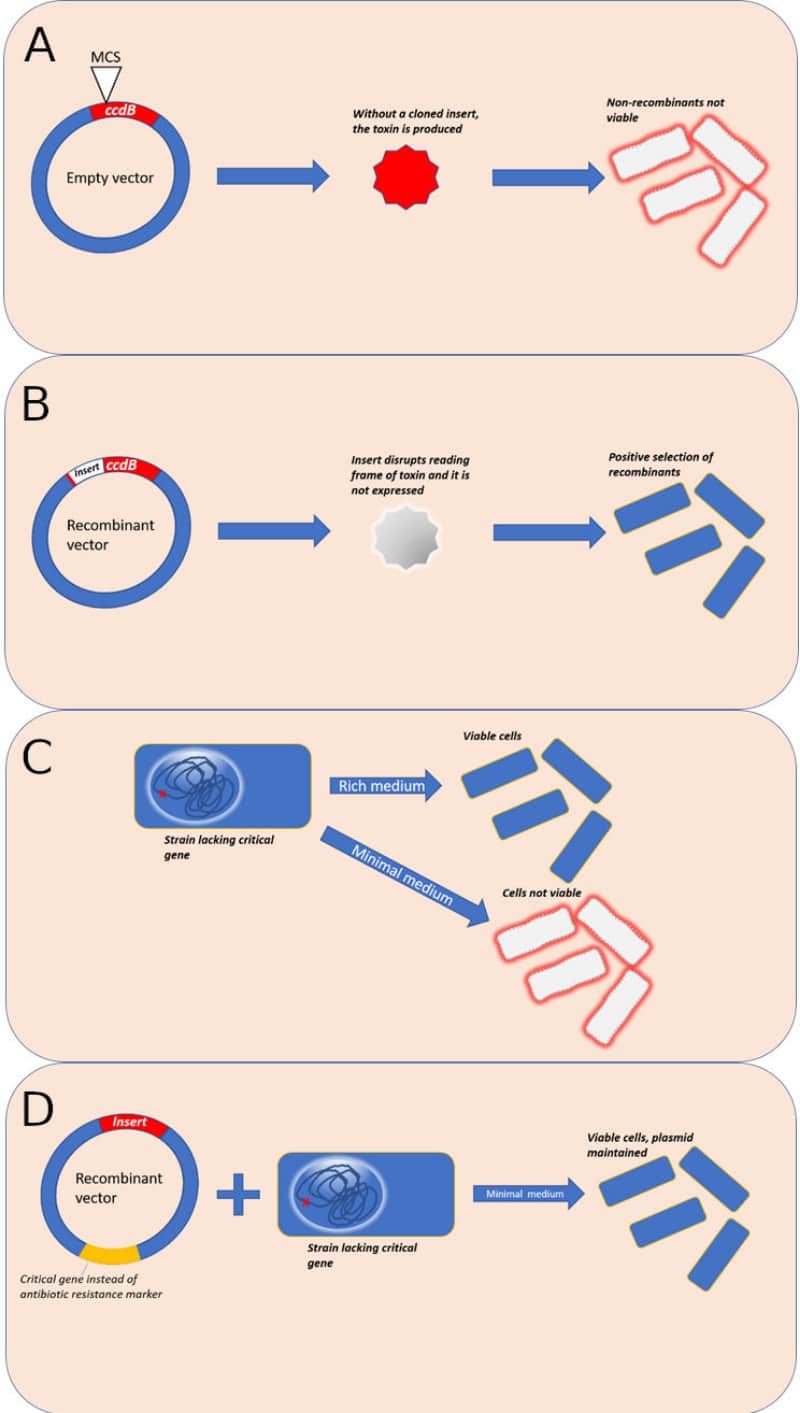 Figure 1.
A, The empty vector produces the toxin. Cells transformed with the empty vector are not viable.
B, Cells transformed with the recombinant vector are viable.
C, Modified strains lacking a critical metabolic gene will not survive when cultured on minimal medium.
D, Recombinant vectors are maintained in the host strain when cultured on minimal medium.

One alternative to antibiotic selection is a post-segregational killing (PSK) system. Here a relatively labile antitoxin is continually produced to inhibit the more stable toxin from killing the cell. A common PSK system is encoded by the ccd operon, which is naturally located on the F factor plasmid present in E. coli. [2]

The toxin-encoding gene, ccdB, produces a protein that poisons DNA gyrase and kills the host cell with the fragmentation of double-stranded DNA. Another gene present in the ccd operon called ccdA, produces the antitoxin that serves as the antidote to the ccdB toxin and allows the host cell to survive. If you lose the ccdA gene, the antitoxin is no longer produced, and the cell succumbs to ccdB. [2]

Delphi Genetics also developed a ccdB system called Staby® specifically designed to eliminate antibiotic selection. [3] This system places the ccdA gene on the vector and the ccdB gene on the host chromosome. Only cells harboring the ccdA-containing plasmid will survive.

An E. coli strain lacking the quinolinic acid phosphoribosyltransferase (QAPRTase) gene is a great example of an AC system. This E. coli strain is defective for the de novo synthesis of NAD and cannot grow on minimal medium unless the QAPRTase gene is present. Swapping the bla gene (ampicillin resistance) from pUC19 with the QAPRTase gene results in a vector that can transform the defective E. coli strain and maintain the plasmid without antibiotics when culturing on minimal medium. QAPRTase is a common enzyme in the NAD pathway in both prokaryotes and eukaryotes, so if you were using the vector for a DNA vaccine let’s say, you could choose the human version of QAPRTase and not worry about the horizontal transfer of a foreign gene. [6]

Other auxotrophic complementation systems have been developed based on other deletions of other critical genes, including:

While these examples do avoid the use of antibiotics, there are a few challenges: You must have or create specialized strains (usually deletion mutants) and media to make these systems work, but the effort pays off.

Hopefully, these examples are helpful to you if you are considering trying alternatives to antibiotic selection. If you already have gone antibiotic-free, don’t be shy and share any tips you have below in the comments! 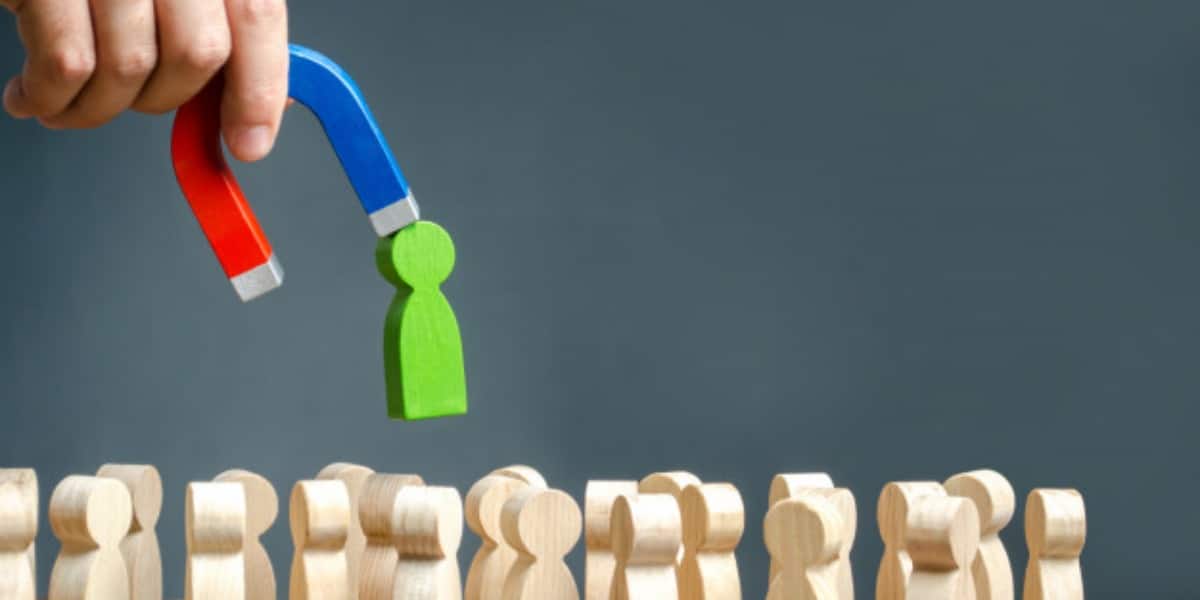