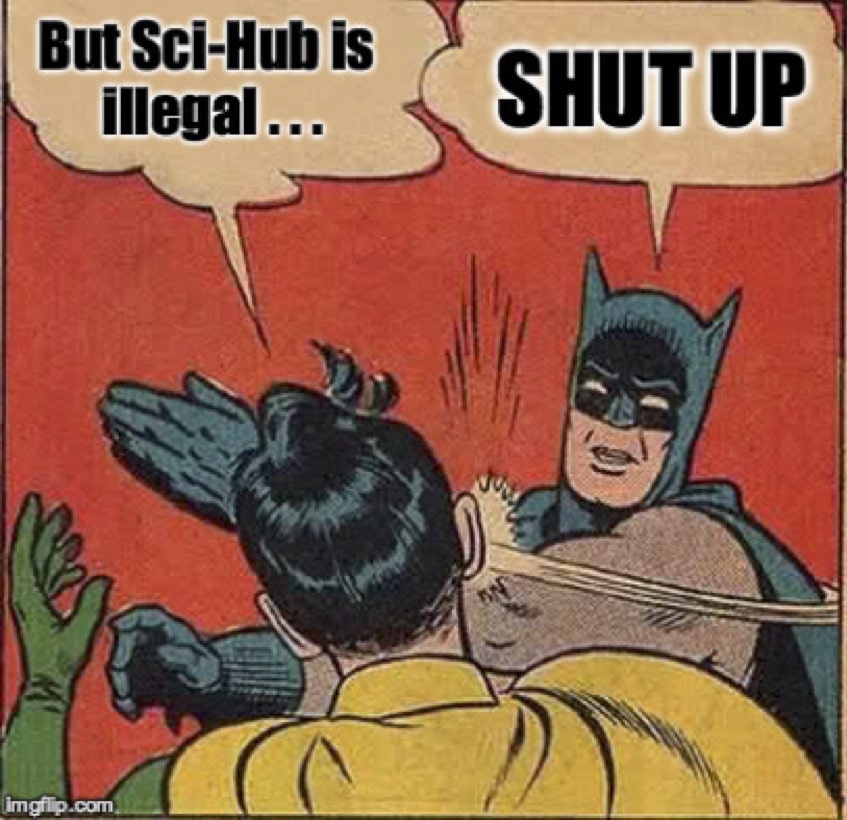 After writing my last article, I have started illegally downloading hundreds of scientific publications from the pirate website, Sci-Hub. When I mentioned that at the last lab meeting, my labmates argued that using Sci-Hub was like stealing in a shop or downloading illegal music. So? Should I feel like Batman or the Joker?

Image created with a meme generator.

The Morality of Becoming a Science Pirate

You may think that it is morally wrong to use Sci-Hub: What about the poor little scientist who works hard to see her copyright ripped off by the pirate website? Let me remind you of the truths about science publishing:

Truth 1: Scientists Have to Pay for Publishing Instead of Collecting Royalties

I was surprised when I realized that some graduate students still believe that successful scientists make money out of publication copyrights. Let me be very clear: no scientist has ever received money for publishing a scientific article. If you want to shock your non-scientist friends, just tell them that. In a sense, Sci-Hub does not rip off the copyrights of the scientist: the publisher does.

What’s worse is that many publishers ask the author to pay for publication. And it is not because the publisher is afraid of losing money: he will make rivers of it. It is usually because he can! The author needs to publish to make a career.

Truth 2: Reviewers and Editors are Unpaid

All reviewers are unpaid: reviewing is among the most technical jobs and the reviewer receives no benefit for it. Most of the scientific editors are unpaid too. I have often heard that universities are paying reviewers for their work as they pay the scientists’ salaries. This is not true, it is not part of our contracts, so it is not officially our mission. However, given that most scientists provide that service for free to the publishers on their worktime, you might expect the universities that pay our salaries to obtain in return discount publishing fees from the publisher. Is it the case?

Truth 3: Subscriptions are Outrageously Expensive – Publishers are not Good Samaritans

Universities also pay the publishers through subscriptions. While the publishers have grown to giant oligopolies (Elsevier’s 2014 revenue is $8.9 billion, 50% of the market is owned by 5 publishers), the subscription prices have exploded: it is called the Serials crisis. With profit margins between 23% (32% according to others) and 42%, science publishing does better than Apple, Google, Microsoft… or most of the world corporations! It has reached a point that the richest university in the world, Harvard, declared that it cannot afford to pay anymore. If the richest cannot pay, who can? It is thus not surprising that USA is the 2nd country visiting Sci-Hub the most.

Truth 4: Overpriced Publications Have a Real Impact on Every Part of Society

Finding a precise piece of information usually means reading dozens of papers for the right one, each at $30. Talk to people around you… Yes, there are many scientists in poorer countries that cannot access science if not through Sci-hub, but this is also true for many non-scientists in your country. I know journalists who cannot check their sources, engineers who cannot read the details of the latest technique, students who cannot reach course-related materials, and patients who cannot check the risks of their next surgery. Have you ever asked yourself how it is possible that myths still exist in today’s medical practice? It may be that GPs just cannot afford to buy the relevant articles. Read this comment by a patient posted on a blog about Sci-Hub:

“[I] just tried it to search an article about depression treatment that I have been trying to get for a good while, I suffer of chronic, drug-resistant depression, and finding new research to discuss with my doctor […]. I could cry.” From F.O., 12 February 2016

Yes, Sci-Hub can paradoxically make a depressive patient weep with joy, as life-changing information becomes available easily – and this can have a huge impact alone. If we could add the societal cost of scientific publishing for accessing public science, and the one for not being able to access it, the sum would certainly be astronomical.

Truth 5: The Founders of Sci-Hub and LibGen are the New Robin Hoods

Now you know of the self-driven publishers on one side, but who is on the other side? While Alexandra Elbakyan was putting together Sci-Hub, Aaron Swartz downloaded millions of JSTOR articles from MIT with the intention to release them for free, before he got caught. Aaron was a genius of the Internet who contributed so much to this area in his lifetime, that he earned his space on the Internet Hall of Fame, at the age of 26. Facing a 35-year-jail prosecution charge, he committed suicide by hanging himself. His guerilla open access manifesto explains his action beautifully and calls for civil disobedience:

“It’s called stealing or piracy, as if sharing a wealth of knowledge were the moral equivalent of plundering a ship and murdering its crew. But sharing isn’t immoral — it’s a moral imperative.”

In terms of ideology and in the current context, I really struggle with the idea of comparing Sci-Hub and an illegal download of the last song of Nicki Minaj.

I hope that I have convinced you that we should support freely accessible scientific information. We need sharing platforms like Sci-Hub; sharing public science should never be illegal.

Special thanks to Dr. Anu Devi

Share this to your network:
TwitterFacebookLinkedIn
Written by Adrien Chopin