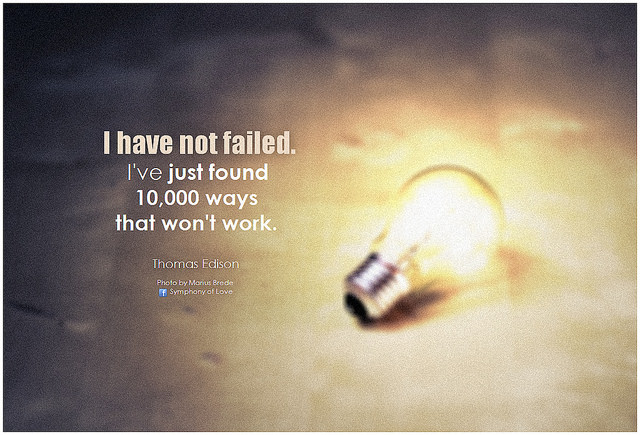 Back in the early 2000s I was working in a lab with a large number of undergraduate Honors students. One student had completed his Bachelor studies with a virtually perfect record and was keen to transfer his successes to medical research. Following the usual basic hands-on training, he performed his very first PCR. After checking his gel, he reappeared looking distraught.

“It didn’t work! It didn’t WORK!” The panic was tangible. Anyone who performs PCR on a regular basis is used to the ups and downs involved, but it occurred to me that this might be the first time in the student’s academic life where he had actually failed at something.

Welcome to research, where failure is not just an option – it’s guaranteed.

A negative result is still a result! So says the office-bound Professor who vaguely remembers his glory days in the lab back when mouth-pipetting was still acceptable.

But I’m not referring to the optimization of new and cutting edge technology here. I’m talking about techniques that are in theory so basic and fundamental that a well-trained chimpanzee could perform them. The frustrating periods where assays and procedures that had previously worked so quietly and obediently suddenly rebel and cause you to doubt even your most basic competency as a scientist. In desperation you consider replacing yourself with a well-trained chimpanzee, but then you consider the amount of Animal Ethics paperwork that would involve.

Thinking positive when results are negative

The important thing to remember is that the universe isn’t just picking on you (as much as it feels that way). Your reagents don’t magically know about your impending deadline or demanding supervisor and they’re not out to get you.

In these situations, logic is your friend. Retrace your steps. Perhaps you used a kit that was getting close to expiration or worse, had been sitting on the shelf for who knows how long. Maybe that gel band just wasn’t as clear and bright as usual; maybe you ran out of a reagent and had to borrow from someone else. Were you tired, distracted, or in a hurry when you did part or all of the work? What has changed since the last time you had success?

It’s the small things that matter. Publications and glory may go to the discoverers of ground-breaking new techniques, but good lab scientists notice the little things and can troubleshoot based on logic and a process of elimination.

How to deal with failure

When I was beginning my PhD, I wish someone had sat me down and given me this simple checklist:

If you do solve the problem, share your new knowledge! Take the time to find others who might be having the same issues and help them out. Even better, put your solution out there on the internet where it’s available for other people to find.

Failure is always an option

Whenever I’m asked about the best trait an academic scientist can possess I always say the same thing: a high tolerance for failure. All the brilliance and ambition in the world won’t make you a successful researcher if you have no patience and no persistence.

One of the most difficult aspects of research is the lack of a linear relationship between hard work and progress. Many talented people become discouraged and leave research because they haven’t been prepared well enough for failure. The key is not to let research failures lead to you feeling like an overall failure.

Einstein may have been (mis)quoted defining insanity as doing the same thing over and over and expecting different results. However, if you focus on the small things, your sanity will remain intact and you’ll build yourself into an experienced valuable resource for other scientists.