Once you have been in the field of Flow Cytometry for a bit, the name Howard Shapiro will be familiar to you. However, for those who are new to Cytometry, you might not be aware of Dr Shapiro and his fabulous book ‘Practical Flow Cytometry’. Most Cytometrists have a paper copy of this bible of Flow Cytometry, however it is now available online from Beckman Coulter.

Howard Shapiro is one of the founding fathers of Cytometry and his book tells you everything you need to know about Cytometry, including songs such as ‘There is no business like flow business’ and ‘it ain’t necessarily flow’. However, Howard penned some important rules in Cytometry: the ‘Shapiro’s Laws of Cytometry’. These laws are actually pretty much common sense but are things that people often forget about. A couple of them (4 and 5) are very specific to the book and need a bit of extra reading. 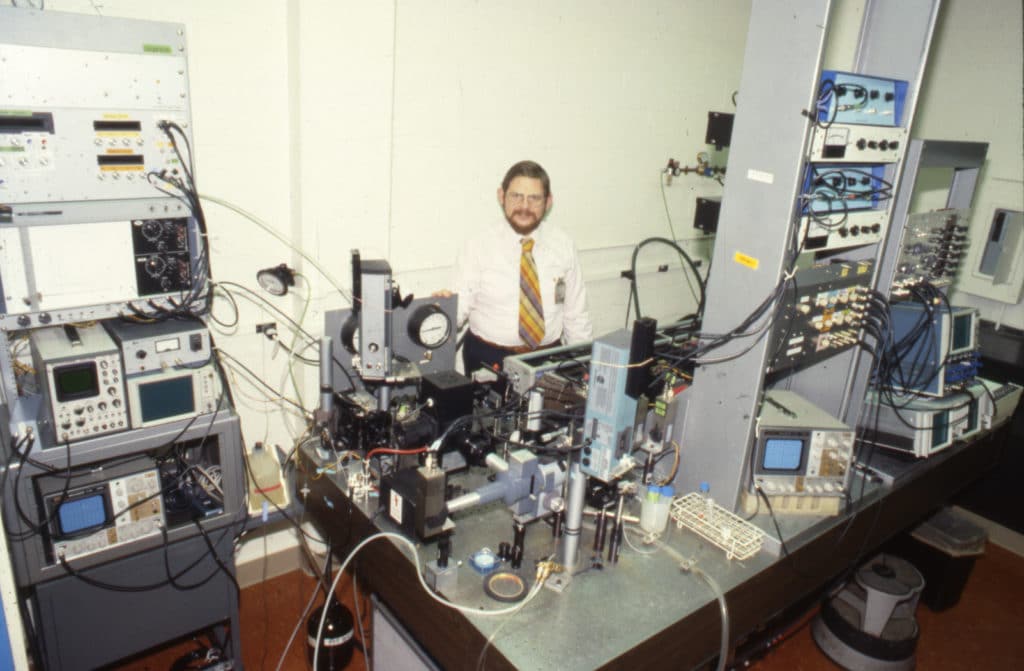 Shapiro’s Zeroth Law: There is no Magic

This law refers to the fact that cytometers, unlike microscopes, can be blocked easily if the users don’t realise that the size of their cells can have a huge impact on the cytometer, especially the size of nozzles for sorting. (see Sorting Large Cells and Materials by Flow Cytometry).

Shapiro’s Second Law : What You See Is What You Get

If your cells are labelled with a fluorescent dye, which you excite with the correct laser and collect the fluorescence using the appropriate filters, you will see the fluorescence emitted from your cells. You can’t change the result. What you see on the cytometer (if experiment is set up with appropriate controls) is what you get.

Shapiro’s Third Law: What’s in the Bottle Isn’t Necessarily What’s on the Label

It’s happened to everyone, you get strange staining in channels were you didn’t expect it. It could be that someone in your lab has contaminated your antibody by using the same tip from another vial. Also don’t forget to ask when borrowing cells from someone if they contain any fluorescent proteins; people often transfect their cells with GFP and forget to tell people they have done this.

Howard’s explanation of this concerns T cell acquisition and loss of antigens during maturation. Depending on where the sample of cells is taken, the population changes could be occurring there or be a rare event in that tissue compartment. This relates to babies in supermarkets as we see pregnant women and women with babies but rarely see babies being born there and this would be a rare event.

Shapiro’s Fifth Law: No Man Walks into a Barber Shop with a Long Beard Who Hasn’t Had a Shorter One and No Barber Can Make a Beard a Lot Shorter Without Cutting It

This is one of Howard’s very specific laws that relates to short-lived transitional states that some cell types undergo. Take the field of haematology and distinguishing between immature reticulocytes and mature red blood cells. Reticulcytes can be identified by their content of RNA, which is lost within a day or so as the cells enter the blood from bone marrow. The distribution of RNA in RBCs is therefore continuous. Consequently, the ‘human observer’ has to decode where to place the razor (or in this case the cytometry gate) into order to determine where to measure the distribution in a continuous population as cells change state.

Shapiro’s Sixth Law: There Are Some Cell Identification Problems That Even Monoclonal Antibodies Can’t Solve

The antigens on the cells surface can be seen as being a cell’s bar code, however these antigens serve a function to the cell. Monoclonal antibodies can be used to identify cells and sub populations of cells however, they are not the answer to all questions about cells.

This is arguably Shapiro’s most important law. If we refer back to the article ‘Crap in Crap out: Flushing Out the Out The Problems in Your Flow Cytometry Data’, if you have a bad sample, bad staining, etc., running those results through an analysis package is not suddenly going to give you a fabulous Nobel Prize winning result. If your are cells don’t look right when running them on the cytometer, they are not going to suddenly look good in post-acquisition data analysis. This links to the Zeroth law – there is no magic.

This law relates to purchasing a cytometer. You need to know what cells are going to run on or are likely to run on a cytometer before purchasing a the machine. For example if your assay uses the Red Fluorescent Protein mCherry, then you will need a 532 nm or 561 nm laser in order to excite it. Using a 488 nm laser will only give around 5% excitation and therefore you will get sub-optimal results. However, this also links back to Shapiro’s third law, find out what is on your cells before running them through the cytometer.

Take some time to look through Shapiro’s book and you learn a lot about the fantastic technique of Flow Cytometry.

Share this to your network:
TwitterFacebookLinkedIn
Written by Rachael Walker
Image Credit: smlp.co.uk