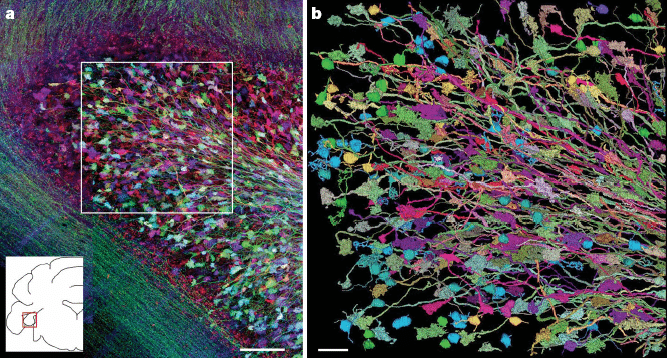 Site-specific recombinases have, for the past 20 years, been one of the most powerful tools in studying the functions of all sorts of genes. Most widely used as the Cre/lox-based system for inserting or deleting genes in mice, transgenic analyses have told us volumes about animal development1. For instance, mouse genetic knockouts are routinely the most convincing method available to determine the most vital function of a given gene product.

In some tissues however, imaging of intricate cellular structures is very difficult. In the brain, for instance, it can be difficult to distinguish one cell from the next in a synaptic circuit, and even more challenging to render a map of neural connections that include divergence and convergence of synaptic relays between many neurons. Fluorescent labels and other staining techniques have been used, to limited effect, but ‘connectomic’ maps of many or all neurons has been beyond the reach of available methods.

Enter Jeff Lichtman and colleagues2. Their paper in this week’s Nature offers an innovative approach to the problem: Transgenic strategies for combinatorial expression of fluorescent proteins in the nervous system. The method, which they call a ‘Brainbow’ system, takes the existing Cre-lox transgenic method and turns it into a combinatorial expression approach. Their approach actually involved two genetic strategies used in tandem, for stochastic expression of multiple fluorescent proteins (XFP’s) from a single transgene. Brainbow-1 used Cre-mediated excision between pairs of incompatible lox sites, alternated to create mutually exclusive recombination events. Brainbow-2 used Cre to invert DNA segments delimited by loxP sites in opposite orientation, positioned in tandem to generate several recombination outcomes. The differential expression of multiple copies of these constructs generated XFP mixtures, allowing the labelling of individual neurons and glia with as many as 90 distinguishable colors.

The result is a pretty impressive proof-of-concept demonstration. Figure 5 (above) is just amazing, depicting cerebellar circuit tracing and color analysis.

Neuroscientists have mapped the brains regions fairly well on the anatomical scale, and shown neural processes on the cellular scale. The inference has long been that when massive amounts of neural circuitry come into play, then new properties emerge, such as consciousness. Brain imaging techniques such as functional MRI have shown us where consciousness is manifested in the brain, but not how. Maybe this new technique will help us to resolve how different neural circuitries influence consciousness*.

* = Livet et al. make no mention of this speculation, that is all me.