If you search the literature using a comprehensive search engine like Google Scholar, you will get several types of articles listed. Most of them are peer reviewed journal articles and many are patents.

The scrutiny that the Patent Office puts a patent under is completely different to peer reveiw. To be issued, the invention described just has to be novel, non-obvious, and “useful”.

And even patents that don’t meet those basic parameters can slip through the net. Here are 10 glaring and hilarious examples, which to me highlight why you should never trust a patent.

Non-novel patents… A basic premise of patents is that the invention should be novel. These certainly aren’t:

1. Method of swinging on a swing
The abstract for United States Patent 6368227 reads “A method of swing on a swing is disclosed, in which a user positioned on a standard swing suspended by two chains from a substantially horizontal tree branch induces side to side motion by pulling alternately on one chain and then the other.”

I’m pretty sure I invented that when I was a kid.

But although it’s lame, the really startling thing about this one is that it is an example of a non-novel patent being published since the patent office has granted essentially the same patent several times: 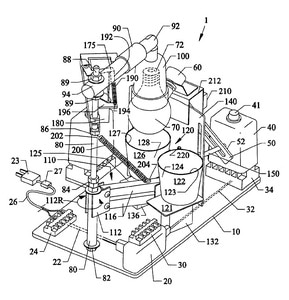 3. Light bulb changer
How many inventors does it take to change a light bulb? None now that the ludicrously complicated automatic lightbulb changer (shown right) described by United States Patent 6826983 is here.

Would you buy one?

5. Beerbrella
Now this one might actually be a winner. The abstract for United States Patent 6637447, entitled “Beerbrella” reads: 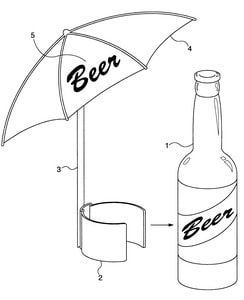 The present invention provides a small umbrella (“Beerbrella”) which may be removably attached to a beverage container in order to shade the beverage container from the direct rays of the sun. The apparatus comprises a small umbrella approximately five to seven inches in diameter, although other appropriate sizes may be used within the spirit and scope of the present invention. Suitable advertising and/or logos may be applied to the umbrella surface for promotional purposes. The umbrella may be attached to the beverage container by any one of a number of means, including clip, strap, cup, foam insulator, or as a coaster or the like. The umbrella shaft may be provided with a pivot to allow the umbrella to be suitably angled to shield the sun or for aesthetic purposes. In one embodiment, a pivot joint and counterweight may be provided to allow the umbrella to pivot out of the way when the user drinks from the container.

The diagram shown on the right explains it much more clearly. A classic.

Does ANYONE actually read patents anyway?

6. Display control apparatus for image forming apparatus
This one is unbelievable. It seems that United States Patent Application 20040161257 was written on behalf of the inventor by a writer with a sense of humor. Claim 9 reads:

The method of providing user interface displays in an image forming apparatus which is really a bogus claim included amongst real claims, and which should be removed before filing; wherein the claim is included to determine if the inventor actually read the claims and the inventor should instruct the attorneys to remove the claim.

This wasn’t picked up by the inventor, or the patent examiner. So does anyone read patents? 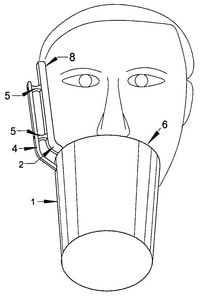 In fact it’s a glass that give you a small shock when you drink from it. Ridiculous in itself but the pseudoscientific claims made in the patent are laughable.

8. Paddle wheel rotorcraft
United States Patent 5265827 claims “An aircraft having vertical takeoff and landing capability having at least first and second laterally extending paddle wheels rotatable on a central axis generally perpendicular to the longitudinal axis of the aircraft and between its nose and tail. Each of the paddle wheels has a plurality of blades pivoted by a system of linear actuators to a determined optimum blade pitch angle.”

So an aeroplane that works like a paddle steamer? I’m no engineer, but despite the inventor’s claims, that’ll never fly.

Special mention… Just when you thought patents couldn’t get any more ridiculous:

9. Apparatus for facilitating the birth of a child by centrifugal force.
The title and diagram (right) say it all. I wonder why the invention described in United States Patent 3216423 didn’t catch on? 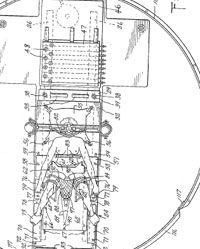 10. A Method for Concealling Partial Baldness

United States Patent 4022227 This is the king among ridiculous patents, and has won an Ig Noble Prize for its sheer absurdity.

The “Method for Concealling Partial Baldness” is in fact a comb-over. Yes, in 1977 father and son team Frank and Donald Smith of Orlando, Florida spent a lot of money to patent a way to comb hair.

The hot invention in question is pictured below.

From a CBS new interview with Donald Smith :

“The combover patent was born when the late Frank Smith and his son Donald, both of Orlando, Florida, began discussing Frank’s baldness over some wine in 1977. Frank shaved his head, but had so many knocks that “it didn’t look good at all,” his son said. “So we went to Plan B.”

A toupee was out of the question. Donald noticed his dad had plenty of hair on the sides of his head. Why not grow one side long and sweep it over the top?

“It seemed a hell of a lot more practical,” Donald said.

The combover patent – complete with instructional diagrams – was meant to allow Frank to bill himself as the father of the hairstyle and better sell a spray he developed to hold it in place, his son said. They never got around to producing the spray, but they did receive an Ig Nobel.”