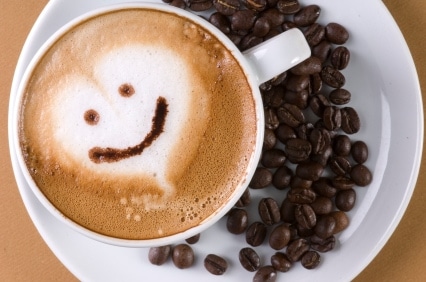 Some of the greatest ideas in scientific history have involved finding connections between widely separated fields. Take human genome sequencing for example: without the computing expertise required to crunch enormous amounts of data, the project would have never taken off. As we move from an era of specialists to an era of super-specialists, collaboration has never been more important. What can we as grad students do to promote collaborative work?  Grab a coffee mug and a couple of friends!  Read on for more thoughts on the importance of interdisciplinary collaboration…

While surfing the web recently, I came across an old paper describing a technique for measuring the area under curve for a glucose tolerance test. The paper suggested a new mathematical technique to determine the area under the curve by breaking it down into regular shapes like triangles and rectangles. The total area is then determined by just adding up the areas of these regular shapes. If you look at it, it is actually the already known trapezoidal rule for approximating a definitive integral. In essence, the author, a biologist, had reinvented the wheel to solve a problem that would have been simple for a mathematician to solve. Incidents like this happen all the time; but what is troubling is that this paper was approved by a peer-review process and has been cited 145 times. The way this paper managed to get through the peer-review process arguably shows the absence of a mathematician among the reviewers. The other concern is that the original author may not have discussed his paper with a mathematician. Both of these concerns demonstrate a gap in interdisciplinary communication.

There are so many reasons to promote interdisciplinary communication and training. For one, you do not have to reinvent the wheel and waste money and time. It can help you think outside of the box. You could become a pioneer in your field by introducing a tested idea from another field. If you have friends in med school, you could get tissue samples to analyze in the lab! Grad students could get much-needed authorship by helping someone in a different field.

So what can you do to improve the scenario, other than waiting for your department to begin a new interdisciplinary program? Well, for starters, if you are a grad student, do not live in a house where everyone is a microbiologist. Even though it might be fun to have debate genomic recombination in Deinococcus over dinner, that is what you do in the lab all the day. I would rather prefer to live with a physicist or an astronomer than with a geneticist. (I am a poor grad student. I can’t afford to live alone!)

Try hanging out with people from other professions – musicians, mathematicians, theater artistes, painters. In addition to taking you out of your shell, it could also widen your horizons. You never know where the next big inspiration is going to come from. Remember that speech Steve Jobs made at the Stanford commencement? The connections just happen.

Walk into that robotics conference you always wanted to attend. Learn something new and talk with someone about that new technology you read on Wired. You will end up with a new business card in your wallet and maybe even a future collaborator. My favorite pastime is to call up a non-bio grad student for lunch or coffee! You will realize that it also helps break the tedium in the lab.

Personally, I have learned so much from my friends in computer science and engineering programs. I was introduced to Ubuntu, which lead to Perl and then to bioinformatics. What have you learned from your cross-disciplinary friends? Share some of the experiences that have helped you think outside of the box.

Share this to your network:
TwitterFacebookLinkedIn
Written by Senthil V. Bhoopalan