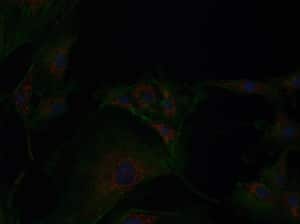 The new INFINITY3S-1UR Microscopy Camera is the newest in the Lumenera INFINITY3 series of cameras. By incorporating a new sensor, it vastly improves dynamic range, quantum efficiency and sensitivity. It fills an important niche to link fluorescence and low-light level measurements in one camera. The new INFINITY3S-1UR camera has features from both traditional fluorescence and low-light cameras, making it a superior instrument in the field— especially for fluorescence biological studies.

What do a sensor’s fill factor, dynamic range, and quantum efficiency have to do with it?

To pick out a new camera, you need to understand a bit about the most important (and expensive) part of the camera: the sensor. The camera sensor gathers light and transforms it into an image. Sensor power comes from its ability to collect and integrate photons over much longer time periods than the human eye. To understand the sensor fully, you have to know about the principles behind it.

The sensor is made up of a grid of photosites, or pixels. Photodiodes connected to each photosite generate electrons (and current) when struck by a photon. These electrons are stored in a potential well. The full-well capacity is the number of electrons that can be stored in that well. There are three key factors for the sensor power that you’ll want to maximize: 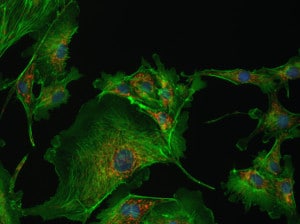 The secret behind the improved performance of the INFINITY3S-1URM is the sensor. This new sensor, made by Sony, has the coveted “EXview HAD CCD II” technology, which increases quantum efficiency and full well capacity to improve dynamic range. Moreover, the technology enhances light efficiency by including the near infrared region.
The newly developed high-speed CCD sensors include ICX825ALA (black and white) and ICX825AQA (primary color filter). The table below shows the improvements over the traditional, popular ICX285:

The new sensor: improves sensitivity (by 70%), smear (by 5 dB), quantum efficiency (by 7dB, at 850nm), and dynamic range (by 6 dB) all while maintaining the same resolution, pixel size, and optical format.

The Many Applications of the INFINITY3S-1UR Lumenera Camera

For many standard fluorescence applications where very long exposures are not required, this camera provides astonishing low-noise results. Additionally, the INFINITY3S-1UR can operate in live video mode or only capture images. When using for a live preview, it is operating in video mode to provide a fast refresh rate. The user can take a snapshot at any point with the lowest noise possible. While the published frame rate by Sony for the ICX825 CCD sensor is 45 fps, Lumenera has designed the camera to support a maximum frame rate of 60 fps over a reliable USB 3.0 interface without sacrificing image quality.

The new INFINITY3S-1UR camera is a smart pick for a new microscopy camera. With this new sensor, high performance output, the latest USB 3.0 plug and play interface, and Windows- and Mac-compatible software, it will quickly becoming the microscopy system of choice by scientists.