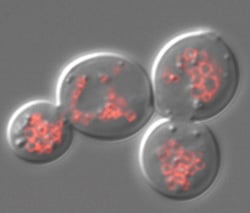 For something a bit more on the fun side, at least if you enjoy a pint of beer now and then – a genomic-based study has reconstructed the origins by hybridization of the lager yeast Saccharomyces pastorianus, published in the journal Genome Research [Press release].

For thousands of years, ale-type beers have been brewed with Saccharomyces cerevisiae (brewer’s or baker’s yeast). In contrast, lager beer, which utilizes fermentations carried out at much lower temperature than for ale, is a more recently developed alcoholic beverage, appearing in Bavaria near the end of the Middle Ages. Lager beer gained worldwide popularity starting in the late 1800s, when the advent of refrigeration made year-round low-temperature fermentations possible. Saccharomyces pastorianus, the yeast used in lager brewing, is a “hybrid” organism of two yeast species, Saccharomyces bayanus and S. cerevisiae. It is thought that the contributions of both parent species resulted in an organism able to out-compete other yeasts during the cold lager fermentations.

Most of us are usually content to just enjoy a pint knowing only that yeast are responsible for the fermentation. While brewers surely know the subtleties of different strains for making different beers types, it’s all yeast to the rest of us.

But genetically, it should not be surprising that these yeasts separate into distinct groups of strains, traceable to single events in brewing history. This study, which used array comparative genomic hybridization (aCGH), traced one such lineage. As the study showed though, S. pastorianus had two origins:

Surprisingly, the researchers found evidence that S. pastorianus strains used by brewers today may not have arisen from a single hybridization event, as was previously believed. “There were two independent origins of today’s extant S. pastorianus strains,” said Sherlock. “It is likely that each of these groups derived the S. cerevisiae portions of their genomes from distinct but related ale yeasts, and that these natural hybrids were then selected by brewers due to their abilities to ferment at cold temperatures.”

Maybe S. pastorianus should be re-classified into two yeast species, based on this data. I wonder whether these separate hybridization events are responsible for distinct types of lagers, and what those might be.