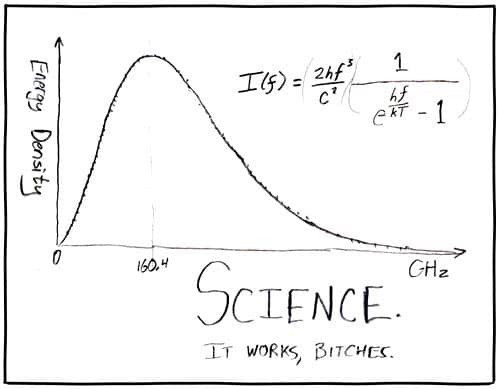 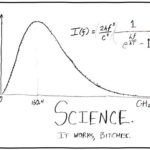 A few months ago I mentioned about how people shouldn’t take science, on faith, but instead on data. Put another way, this is about post-modernism, or anti-modernism, where facts and their interpretations are all relative, at least to some degree.

I came across an outstanding essay on the subject by Daniel Dennett over on Butterflies and Wheels: Postmodernism and Truth. There are a few excerpts below the fold [Emphasis mine]. Yes, there’s still Kuhnsian sociology of science, although I’ve always read Kuhns as agreeing with the bit from the last quote that I have below the fold: “The methods of science aren’t foolproof, but they are indefinitely perfectible. Just as important: there is a tradition of criticism that enforces improvement whenever and wherever flaws are discovered.”

[T]hose fields where the stakes are higher–and more direct–there is a longstanding tradition of being especially cautious, and of taking particular responsibility for ensuring that no harm results (as explicitly honored in the Hippocratic Oath). Engineers, knowing that thousands of people’s safety may depend on the bridge they design, engage in focussed exercises with specified constraints designed to determine that, according to all current knowledge, their designs are safe and sound. Even economists–often derided for the risks they take with other people’s livelihoods–when they find themselves in positions to endorse specific economic measures considered by government bodies or by their private clients, are known to attempt to put a salutary strain on their underlying assumptions, just to be safe. They are used to asking themselves, and to being expected to ask themselves: “What if I’m wrong?”

Granted, scientists are still human and falliable. But yes, the whole of the endeavor of scientific research, to say nothing about other technical occupations, are centered around scrutinization of results, and “bootstrapping our way to ever greater accuracy and objectivity,” to refer to the next quote. I would just change accuracy to precision there, because accuracy implies a pre-defined target, whereas precision instead implies the reproducibility of results. As I found out early on in grad school, trying to fit your results to your expectations is bass-ackwards.

Is the line really straight? How straight is it? In response to these questions, we develop ever finer tests, and then tests of the accuracy of those tests, and so forth, bootstrapping our way to ever greater accuracy and objectivity. Scientists are just as vulnerable to wishful thinking, just as likely to be tempted by base motives, just as venal and gullible and forgetful as the rest of humankind. Scientists don’t consider themselves to be saints; they don’t even pretend to be priests (who according to tradition are supposed to do a better job than the rest of us at fighting off human temptation and frailty). Scientists take themselves to be just as weak and fallible as anybody else, but recognizing those very sources of error in themselves and in the groups to which they belong, they have devised elaborate systems to tie their own hands, forcibly preventing their frailties and prejudices from infecting their results.

In case you haven’t noticed from reading scientific papers, researchers, amongst themselves, are notoriously conservative (not in the political sense) in how they make inferences based on available data. If you claim something in a manuscript, the peer-review process is supposed to call you out on it – and if the initial reviewers miss such overstatements, someone somewhere will probably notice, sooner or later. Funding requests are another thing, of course, but even there a scientist is judged on their ability to collect and interpret data which matches reality. If they fail to meet expectations in terms of data-driven research, then they’re in trouble.

What inspires faith in arithmetic is the fact that hundreds of scribblers, working independently on the same problem, will all arrive at the same answer (except for those negligible few whose errors can be found and identified to the mutual satisfaction of all). This unrivalled objectivity is also found in geometry and the other branches of mathematics, which since antiquity have been the very model of certain knowledge set against the world of flux and controversy. In Plato’s early dialogue, the Meno, Socrates and the slave boy work out together a special case of the Pythagorean theorem. Plato’s example expresses the frank recognition of a standard of truth to be aspired to by all truth-seekers, a standard that has not only never been seriously challenged, but that has been tacitly accepted–indeed heavily relied upon, even in matters of life and death–by the most vigorous opponents of science.

Platonism may have been greatly flawed in some respects, but in mathematics, he and his fellow Ancient Greeks were very perceptive fellows. They noticed that quantification was as objective a way of interpreting reality as you could get. And such quantification is exactly what the precision of science is built on – exemplified best by the calculation of the value of Pi. We still don’t have an accurate or perfect number that equals Pi, only an astoundingly precise estimate for that number. The same is true for all of science – again, we are bootstrapping our way to better and better approximations of reality.

The methods of science aren’t foolproof, but they are indefinitely perfectible. Just as important: there is a tradition of criticism that enforces improvement whenever and wherever flaws are discovered. The methods of science, like everything else under the sun, are themselves objects of scientific scrutiny, as method becomes methodology, the analysis of methods. Methodology in turn falls under the gaze of epistemology, the investigation of investigation itself–nothing is off limits to scientific questioning.

Indeed. And this epistemology is how knowledge is acquired (as opposed to certainty*).