As bench scientists, we deal primarily with the tangible aspects of biology. The mechanisms and pathways that we try to understand not only allow for us to delve more into how the world works, but can also shed light on disease. However, there is a subject that while distant from traditional bench work, is equally as important in its contribution to disease prevention and deserves more attention. And that topic is… epidemiology!

While there are many different areas to epidemiology, the underlying goal is to predict and prevent disease within a defined population. From Ebola to influenza, large scale infections are an ever-present threat, and epidemiology is the cornerstone of keeping everything under control. Still, not many people, even scientists, truly understand what epidemiology is all about. For those itching to learn a little more about a fascinating subject, read on!

John Snow Is Kind of a Big Deal

No, not Jon Snow…JOHN Snow. Many consider him to be the father of epidemiology because of his effort to trace the source of a cholera outbreak in the Soho neighborhood of London in 1854 (1). Until that time, most people believed that diseases were caused by pollution or “bad air”, otherwise known as the miasma theory. I know, I know, but at this point nobody knew how disease was transmitted (this was before the germ theory was developed), so let’s give them a break!

Being the forward-thinker that he was, Snow thought there was no way cholera was spreading through the air, so he began investigating what was really going on. He hypothesized that the outbreak was due to sewage contamination of the local water supply and started mapping the area where the water pumps were located and where the people who got sick from cholera lived. And wouldn’t you know, every single person afflicted by the disease had been retrieving their water from one pump centralized on Broad Street. Eventually, Snow was able to convince the local authorities that this one water pump was the culprit, resulting in it being removed from the neighborhood and thus ending the outbreak.

The important, and pretty interesting, point to this story is that it wasn’t Snow’s chemical and microscopic examination of the water sample from the Broad Street pump that conclusively proved its danger – it was the pattern of disease that ultimately persuaded the local council.

Not as cool as being the one true king, but not a bad legacy to leave behind.

Epidemiological Triangles, to be exact. It’s a simple diagram to help visualize the connection between an external agent, a susceptible host, and an environment that supports the transmission of the agent from a source to that host (Figure 1). And since we don’t want these connections to result in disease outbreaks, the Epidemiological Triangle allows scientists who are assessing how to control and/or prevent the disease in question to focus on where connections between these components can be broken. For instance, in the case of the cholera outbreak we just talked about, cholera is the agent, humans are the host, and the sewage-polluted water is the environment. By eliminating the environment (removing the pump responsible for delivering contaminated water), the connections to agent and host are broken, and the outbreak was stopped. 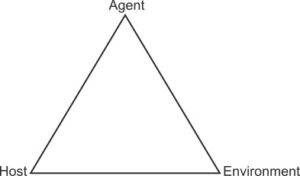 Huh? Yeah, I know. Just hear me out. Obviously, the root of the word epidemiology is epidemics, but epidemiology is actually the study of diseases as they pertain to populations, rather than just individuals. And while epidemiology is incredibly important during epidemics, the goal is always to avoid any disease from progressing to that point. To achieve this, epidemiologists actually pull from a ton of other focuses, including biostatistics and informatics, biology, behavioral sciences, physics, ergonomics, economics, and social sciences. And a WHOLE LOT of observation and organization. So if you’re Type A with a double or triple major, epidemiology may be the career choice for you!

Correlation Does Not Imply Causation

As cool and interesting and helpful as epidemiology is, it still is pretty limited, particularly when brought forth as evidence in a legal hearing. As convenient as it would be to have “one cause-one effect” when dealing with death or disease, this is rarely (leaning toward “never”) the case. We all know that most outcomes are more convoluted than that, usually caused by the culmination of several components and influences, both internal and external. Thus, when presented as evidence in court proceedings, epidemiological studies can only prove that an agent COULD have caused, but not that it actually did cause, an effect in any particular disease, no matter how strong the pattern and data may lean toward a certain answer.

A perfect example of this are cases brought against tobacco companies. Most people are aware of the strong correlation between tobacco use and subsequent lung cancer or disease. Still, this strong correlation does not prove causation, especially since other factors are often involved in the development of a disease, and there is usually a distinct lapse of time between smoking and the manifestation of disease. So frustrating – but all is not lost! It is possible to get by on these strong correlations between cause and effect, so long as they meet some specific criteria.

Due to the fact that sometimes epidemiological evidence can reveal strong associations between a presumed cause and an observed effect that it is hard to ignore (like in the case of tobacco use and lung cancer), Sir Austin Bradford Hill proposed a set of criteria in 1965 one could follow to validate such evidence (2). These criteria require one to identify:

link between smoking and lung cancer, as well as connections between ultraviolet B radiation and cancer; alcohol and cardiovascular disease outcomes; and infections and risk of stroke, amongst other morbidity connections that would not have otherwise been accepted.

And there you have it: 5 tidbits about epidemiology that should serve you well on your next trivia night. What are some things you love about epidemiology, that you think others may not know or are misrepresented about the subject? Comment below!