The canonical motto in Toxicology is ‘the dose makes the poison.’ That is, enough of anything can kill you. But, as Deborah Blum notes in the end of her book, “poison by water doesn’t unnerve us. The real scare comes from those elements and compounds whose toxicity is measured in drips and drops.”

In The Poisoner’s Handbook, the science of such poisons is explored through stories of murder and corruption in Prohibition-era New York. This informative book has all the elements rarely found together in non-fiction: science, suspense, history, and true crime.

The protagonist is a public health crusader in the form of New York’s first legitimate Chief Medical Examiner, Charles Norris. Throughout his career, Norris fought tirelessly against corrupt government bodies of the Tammany Hall era who answered to money much faster than to a public health crisis.

I found this relatable as scientists today continue to face many of the same struggles: scientists and their work are constantly undermined in the public sphere by government officials pandering to corporate backers.

Like most superheroes who rarely work unassisted by a steadfast side-kick, Norris is aided in his cause by the meticulous toxicologist, Alexander Gettler. In the wake of Walter White and Gale Boetticher, Gettler’s type A personality and devotion to sound science is not only accepted but admired. After all, in Breaking Bad, Mr. White’s fastidious adherence to protocol produces the best product out there; the same can be said for Gettler’s exacting methods used to inform some of the earliest and most innovative studies on carbon monoxide poisoning and ethanol intoxication. Blum celebrated their persistence as the key to successful government intervention and regulation of harmful chemicals. Frankly, that’s a success that needs to be applauded as much now as it was then. 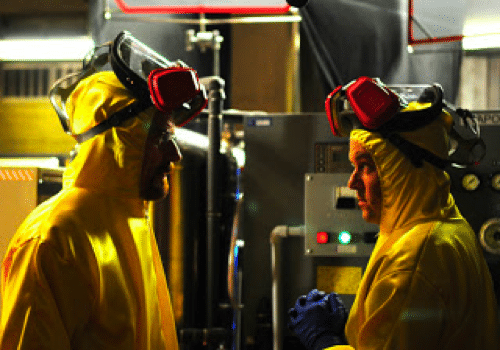 In addition to understanding how an array of poisons (carbon monoxide, arsenic, radium) can hurt you, this book left me with a new appreciation for early bench-science. Without the use of spectrophotometers and store-bought cell lines, scientists needed to be creative with their tools and methods.

Buying some liver from the butcher or—better yet—using poisoned corpses to investigate the mechanisms of toxicants was standard and effective. An intimate knowledge of chemistry was also required to understand that you can detect mercury using a copper probe, for example, or why certain compounds reacted with others to produce a detectable signal (gas, color change, etc). It made me feel lucky (and spoiled!) to have the tools we do today.

In The Poisoner’s Handbook, Blum concocts a perfect solution that’s heavy on the chemistry but goes down as smoothly as arsenic-laced pie. Here are a couple personal take-away points from this informative page-turner:

Title:  The Poisoner’s Handbook:  Murder and the Birth of Forensic Medicine in Jazz Age New York